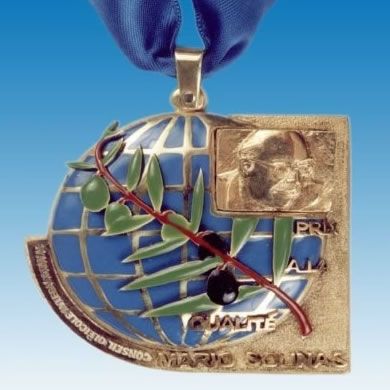 Each year since 2000 the International Olive Council (IOC) hosts arguably the world’s most coveted competition for olive oil, the Mario Solinas Quality Award. The award, which is granted only to the top-scoring oils from around the world, is named after the late Professor Mario Solinas, who did so much in the field of research, working closely with the IOC to standardise quality criteria.

The aim of organising this competition is to encourage individual producers, producer associations and packers in the producing countries to market extra virgin olive oils displaying harmonious organoleptic characteristics and to encourage consumers to recognise and appreciate the sensory attributes of such oils.

The oils were classified according to the intensity of their type of fruitiness before being evaluated by a number of IOC-recognised panels according to a special 100-point score sheet which marked the oils for their olfactory, gustatory and retronasal sensations as well as for their harmony, complexity and persistence. The 24 top-scoring oils in each fruitiness section went through as finalists for assessment by an international panel of judges, which selected the winners of the first prize of the Award for 2014 and also proposed second and third prize-winners.

This year, the big winners were producers from Spain and Portugal, with first prizes going to:

The awards were presented at the 22nd extraordinary session of the IOC Council of Members in Madrid. At the awards ceremony, IOC Executive Director Jean-Louis Barjol has announced plans for a new edition of the Mario Solinas awards in the Southern Hemisphere and second, that the next awards ceremony will be held at the Summer Fancy Food Show in New York City in July 2015.

Oils entered into the Mario Solinas awards must have a minimum quantity produced, which is to be sealed in a tank during the award judging. After the prizes are awarded, participants may unseal the tank holding the batch of oil entered and winners are allowed to announce the prize on the labels of the extra virgin olive oil belonging to the same batch as the winning sample using a special logo available from the IOC Executive Secretariat for this purpose.

A complete list of winners can be downloaded here: Mario Solinas Awards